Our doctors have redefined liposuction in Orlando thanks to innovative Aqualipo® technology! Most people have seen videos of old-fashioned liposuction techniques. The aggressive, violent movement of the cannula as it attacks body fat. The high-powered suction to purge the fat. The patients taking off work for weeks with swollen, bruised, and sore bodies. But now, with the advent of Aqualipo® Orlando liposuction, patients are getting excellent results, with less discomfort and vastly smoother recoveries.

Aqualipo®… It’s Not Your Mother's Liposuction!

By using an innovative liposuction technique, Aqualipo® is better able to meet patient needs in every area as compared to traditional liposuction. Aqualipo® is minimally invasive, with no need for general anesthesia and less risk of complications. Aqualipo® promotes sculpted, long-lasting results, while minimizing bleeding, bruising, and swelling. Aqualipo® patients don’t have to endure weeks of downtime. In fact, most patients can continue their regular activities immediately following their procedure.

How Does Aqualipo® Remove Fat Compared To Traditional Orlando Liposuction?

Liposuction techniques of the past relied on aggressive fat removal and general anesthesia. The cannula was inserted beneath your skin and vigorously moved back and forth to break up unwanted fat. High-powered suction then extracted this fat from your body. While this method was effective, it left behind unnecessary damage. Patients used to expect substantial bleeding, bruising, and swelling around the treatment area(s). Weeks of downtime were not uncommon.

Thanks to Aqualipo® technology, you do not need to worry about an invasive liposuction procedure or lengthy recovery! Aqualipo® delivers highly-concentrated pulses of water to the target area(s). A tiny incision is made in the skin and the Aqualipo® cannula is inserted below the skin. Water from the cannula gently loosens unwanted fat cells from surrounding tissues, making these fat cells easier to extract via liposuction. The result is less bleeding, bruising, and swelling.

Yes! Aqualipo® better preserves your fat cells, as well as nearby tissues, resulting in less recovery time. Since Aqualipo® is minimally invasive, patients do not need nearly as much time to recover from liposuction. Many Aqualipo® patients resume their daily activities within the same day as their treatment!

Which Areas Can You Treat With Aqualipo®?

Aqualipo® can remove excess fat from most areas of the body. Some of the more common treatment areas include the chin, neck, arms, chest, back, midsection, thighs, and buttocks. Depending on your surgery goals, you may be a candidate for combination liposuction to treat multiple areas in one procedure. Our liposuction doctors would be happy to meet with you to determine if Aqualipo® is right for you during a consultation at our Florida offices.

How Does Aqualipo® Water Liposuction Differ From Other Body Sculpting Surgeries?

Aqualipo® is a minimally invasive fat removal technique. This differs from traditional body contouring surgeries that focus primarily on removing and repositioning loose or excess skin. During body sculpting surgery, sagging skin is lifted, reshaped, and excised to restore firmness to your figure. Procedures like tummy tucks, thigh lifts, and back lifts can require numerous incisions and result in lengthy downtimes for patients.

Instead, Aqualipo® focuses on removing unwanted fat cells and sculpting more pronounced curves with little-to-no downtime. In certain cases, patients may be candidates for combination body sculpting surgery with liposuction. Our plastic surgeons will meet with you to further explain your options and answer any questions you may have regarding your liposuction procedure.

Who Can I Talk To About Liposuction In Orlando?

Our liposuction doctors offer personalized treatments that are tailored to your individual needs and goals. To schedule a lipo consultation, please give us a call at 844-567-5476 or request an appointment online at one of our Florida offices: Orlando, Tampa, Melbourne, The Villages®. 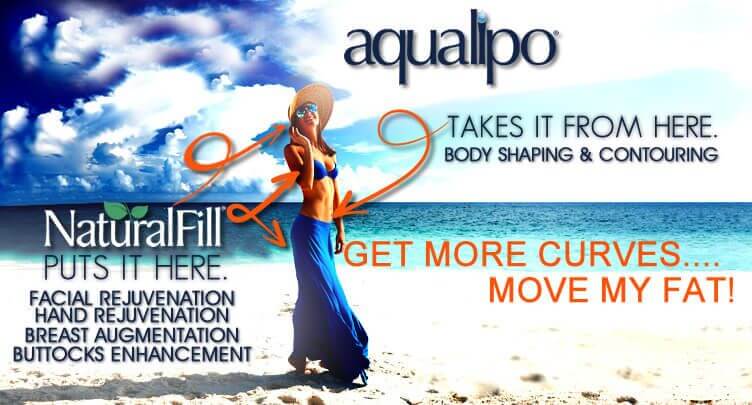 *Disclaimer: The information contained on this website is intended to be purely educational in nature and does not create a physician-patient relationship with Aqualipo LLC or any agent, servant or employee thereof. By no means should the information contained in this website be considered as a substitute for consultation with a qualified physician and it does not constitute a second opinion. This website and its contents do not represent or claim to provide the information needed for a patient to give his or her informed consent to any surgical procedure or are a reflection of individual patient results, as they may vary patient to patient. Individual results will vary and no guaranteed result is stated or implied by any photo use or any statement, testimonial, or video on this website. The results depicted in “before” and “after” pictures and stated by any “patient testimonial” illustrate results you may or may not achieve if you choose to have a cosmetic surgery procedure. Individual results may vary by patient. Please see our Notice of Privacy Practices.